‘During the raid, we watched as the bombs fell
like manna from heaven.’ 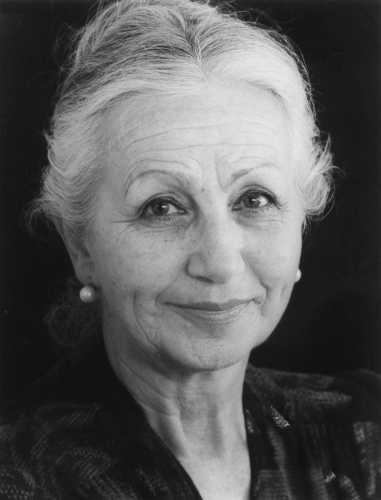 
Olga Horak, née Rosenberger, was 17 years old when in August 1944 German troops invaded Slovakia. The Rosenberger family went into hiding but was discovered a short time later and deported to Auschwitz. In late October 1944 Olga Horak was sent to Kurzbach/Rożniątów (Poland) to perform forced labour. During the death march from Kurzbach to Bergen-Belsen concentration camp, she had to pass through Dresden on January 6, 1945 and was caught in one of the air raids on the city. Olga Horak was liberated from Bergen-Belsen by the British Army. She has been living in Sydney/Australia since 1949.


Mrs Horak, on the death march from Auschwitz via Gross-Rosen to Bergen-Belsen you passed through many German towns. What were the local population's responses to your suffering?


From Auschwitz we were sent to Kurzbach where there was a camp and we had to dig trenches in a forest, in the middle of winter. It was very hard to endure. One day we were driven out of there. And that was the death march, the beginning of our "exclusive" journey to Dresden. Usually we marched on main roads, but also often zigzagged through small villages. We were terribly malnourished and it was bitingly cold. These were the first days of January 1945, I think. I don't remember the dates exactly, I can only say that I saw Christmas trees through the windows when we walked through small villages. And that was how I knew it was December 1944 or beginning of January 1945.

After hundreds of kilometers we finally arrived in Gross-Rosen concentration camp. Gross-Rosen was a huge camp and so crowded with people from other camps that we were not even able to enter the barracks. So we stayed outside without shelter for three days and three nights and then had to continue the march. After that we arrived in Dresden and were led to a railway line. It was not the main station, for sure, but it was in the middle of the city. We were pushed onto open wagons, not closed ones. They were not meant for animals and certainly not for humans. And suddenly an air raid began, and we were so terribly weak. We could not run since there were always the guards around us. They had dogs, and those who dared to step out of line were immediately shot. Besides, everybody would have immediately detected us because we had no hair and no clothes. We had numbers painted on our backs and on our front, left-hand side too. So we were real concentration camp prisoners. We had nowhere to hide, and nobody would have hidden or helped us anyway. But the guards ran away to the bomb shelters and, as I always said, the bombs fell like manna from heaven.

It was actually terrifying. We only hoped that the Allies were approaching and that our liberation was perhaps coming closer too. But it took longer than we hoped. We were not afraid of the bombs. Many of us wished to die there because this would have shortened our fate. But this was not the case. After the raid the guards came back and we were transported to Bergen-Belsen, into yet another hell.

Unlike the big concentration camps at Auschwitz, Sobibor or Treblinka, the death marches were not located in Eastern Europe but instead forced prisoners through the middle of German cities. Can you explain why so little attention was paid to you? The history of the death marches is hardly ever discussed in Germany. There is a steadfast insistence that no-one could have known anything because the camps were located in Eastern Europe.


I can not accept these myths. They are not true. I myself saw how the Germans were evacuated as we marched. They were on horse-drawn carts. Everything was piled up on them: eiderdowns, milk churns and hams hitched onto them. We saw that. They did see us! They knew who we were. It is terrible that no-one showed any compassion at all. And we are not talking here about men or soldiers or guards. The whole population knew what was going on.


After your liberation, in 1949, you emigrated to Australia. What have you experienced since then? You have been living there for more than 60 years.


Yes, 61 years. And regrettably I lost my husband a year ago and that is very, very hard for me. The loneliness is very hard to take. It has always been my desire never to be alone. I was alone after my liberation. I was the only survivor of my family, so I always wanted to raise a new family one day. And that's what I did, here, in Australia. But the loneliness today is very, very hard for me to take. I am 83 years old, but I still feel very active. I work as a volunteer at the Sydney Jewish Museum, which is not the biggest in the world but the best, one of the best. I come into contact with many interested persons there, also with school classes. It gives me a purpose, to go there and make myself useful.


Did you ever receive any financial compensation from Germany for the crimes committed against you?


No. Now I will share something very sad with you: I applied for compensation three times but each time it was rejected. I was awfully disappointed since compensation is due to everybody who survived, actually. This is an injustice that is inexplicable and is still very difficult to stomach, even today. I am at an age now when it does not have quite the same importance for me any more. I don't need anything at all except the love of my family. But back then I was young, I had been being persecuted, I did not get an education, I lost my parents, my whole family, and when I was liberated I weighed 29 kilos and was seriously ill. I needed all the help I could get. And since Czechoslovakia was very poor after the war we didn't get any help from the government. I received some benefits from America, but that was barely enough to keep body and soul together, as the saying goes. We fled the communist government and Australia opened its doors and gave us the opportunity to start a life in freedom. We had two wonderful daughters and now I have three grandchildren as well. But they are all grown-up and don't need their grandma anymore.


You dedicated your book "Auschwitz to Australia" to your murdered parents and your murdered sister Judith but also to your daughters Evelyn and Susie and their children. How do these generations deal with the Shoa?


When I came to Germany with a film crew four and a half year ago my husband was not strong enough to come with me, that's why my older daughter accompanied me. For my daughter this was an experience I could never have conveyed to her by word of mouth. You must understand one thing: Our children grew up in a very extraordinary home. There was no grandma, there was no grandpa, there were no aunts, no cousins, no one. Only their parents who had to work from morning to night. We couldn't tell our children about our disaster right from the beginning. We had to tell them stories of Little Red Riding Hood and Snow White and funny things. It was only later, when they realized that our home was not normal, that they started to ask us questions. That was when we began to talk about what had happened. We hadn't talked about it in years and when we started we probably talked about it way too much. They noticed it from little things. We didn't throw away any food, everything had to be used up. And actually, this is also an illness we inherited. When the children got to the point when they didn't want to hear it any more, my daughter said to me: ‘Mama, you've already told us everything you went through. We know all about what happened. Now it’s time to write your book.’ And that's what happened. Today my daughter often tells me: ‘Live for tomorrow, don't live in the past!’ But I don't live in the past, the past lives inside me. And you must not deny that, ever.


Mrs Horak, thank you for the interview.


This telephone interview was conducted in German


During the research for the audioscript on the persecution and annihilation of Jews in Dresden 1933 - 1945 the authors found evidence of at least two more death marches through Dresden. The prisoners of one of these death marches were in the Dresden city centre during an air raid on the 13 February 1945. From 14 to 16 February 1945, 1.300 Jews were camped on the Dresdner Heide [Heath] within the city boundaries but outside the bombed centre. On the morning of 17 February 1945 they were driven over the Carolabrücke [Carola Bridge] and through the whole city. The destruction apparently did not prevent the SS from carry out their guard and escort duties in connection with the death march.

(cf. article "But who ever asked us for a pardon? Pardoning died in the death camps." by Heike Ehrlich and Kathrin Krahl in this volume)


The original interview was published in: Jungle World, 6, 11.02.2010. Reprinted with permission.


Citation audioscript Dresden: Interview with Olga Horak - 'During the raid, we watched as the bombs fell like manna from heaven.', in: Abolish Commemoration – A Critique of the Discourse to the Bombing of Dresden in 1945, online at http://www.abolishcommemoration.org/horak.html [accessed dd.mm.yyyy].